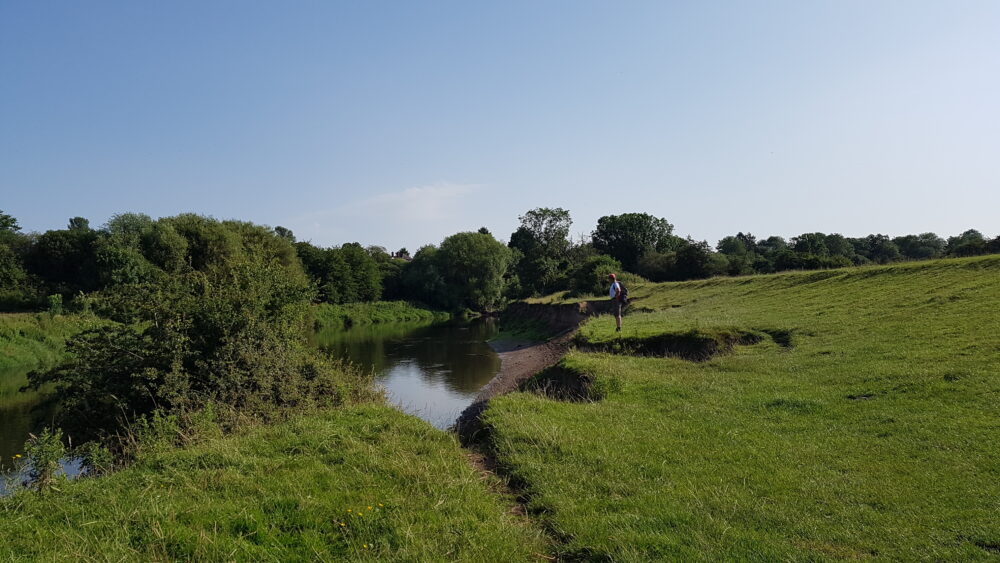 We knew today would be the hottest day, 35 degrees, so we set off as early as possible, grabbing a slightly disappointing breakfast at the cafè opposite (muffin and coffee) before striding out at 8am along the path beside the river. Before long, we were involved in the first conversation with an elderly man and his dog and it is this friendliness and willingness to stop for a chat which I love about walking in the UK.

We passed the area around Uffington, where the poet Wilfred Owen would walk with his family to church. He was a war poet and died in battle at the age of 25 in 1918 after writing openly about the horrors of war, somewhat against the general thinking and patriotism of that time.

It was already getting hot and we were grateful for the shade in the scrubby woodland, even though we had to fight through the brambles, gorse bushes and long grasses with the accompanying insects to make headway.

Dripping and with great relief, we reached the village of Atcham after 12km. Crossing the bridge, we passed the St Eata’s church on the way, another stone bridge built in the 11th century. Clearly with Saxon origins and apparently the only church in Britain dedicated to the Celtic St.Eata, one of St. Aidan’s disciples at Lindisfarne. We pass by because at this temperature it is the Georgian hotel next door, with its prospect of a cool drink, which holds our attention more.

The pub was called “The Mytton and Mermaid” and it is named after John “mad Jack” Mytton who was a British eccentric and rake (such a nice word, meaning Wüstling) from the time 1796-1834. He was known for his flamboyant, eccentric behaviour such as riding horses indoors, letting one horse live in the same house, sitting beside the fire with him in the evenings and looking for accidents by deliberately driving too fast. His family were Shropshire squires from nearny Halston Hall and he managed to drink and squander away the family income, dying at the age of 38 in a London prison for debtors. His funeral cortege halted here on its way to the chapel at Halston, thus giving the pub its name.

So, at mad Jack’s bar, we enjoyed learning about his story together with a couple of cool drinks to hydrate us.

Carrying on, the heat was unbearable and we were offered water by a kind lady from her garden as we passed by. Our next goal was Cressage, where we planned to have lunch. This stretch was one of the toughest, walking on small country roads, passing isolated properties and the relentless sun. We finally reached Cressage at 14.30 and our spirits were lifted at the thought of lunch. Once more, however, they were dashed at the sight of the boarded up pub “The Eagles”. What a feeling! The day was saved, however, after spotting a group of youngsters, drinking a bottle of Coke. They pointed us in the direction of the local Newsagent (Kiosk) and four minutes later we were able to purchase drink and sandwiches, fortifying ourselves for the final 9km.

On we went, up and down, dripping with sweat before finally reaching Ironbridge at 18.30. The pub called the Swan Smoke and Taphouse had a good room, if a little noisy, but more importantly great food. After walking 32km in 35 degrees, half a chicken with a great spicing and a couple of beers revived us and our first impression of Ironbridge was nothing but positive.