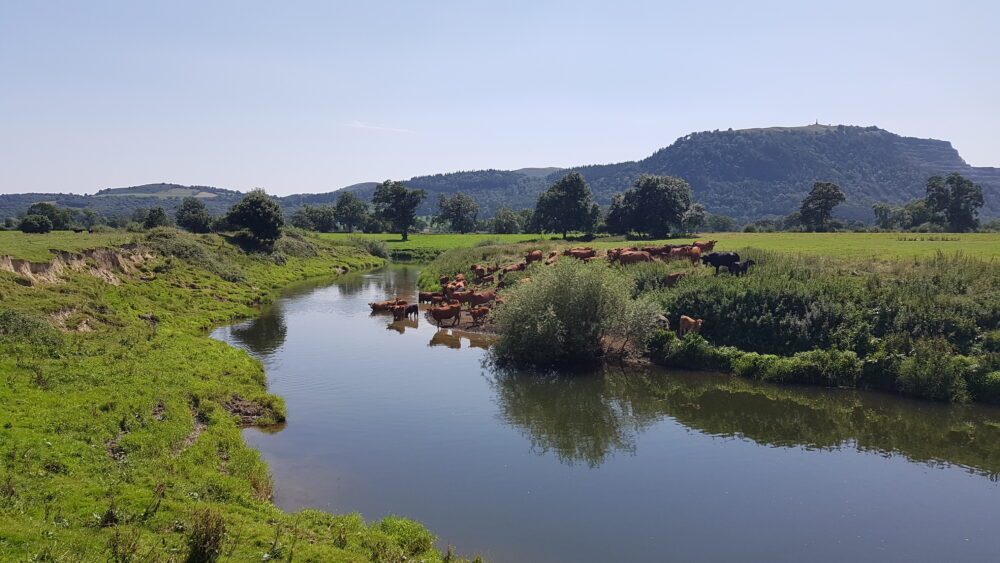 Oh the joys of having a wonderful hotel room with drying facilities, ironing board and great tea and biscuits. I certainly belong to those who love the feeling of putting on an ironed T-shirt, not something everyone can relate to. As expected, the breakfast buffet offered a wide choice of good quality food, which we did great justice to.

We said goodbye to the 18th century Royal Oak, suitably impressed as hopefully the Queen and Duke of Edinburgh were when they stayed there in 2010. We quickly found the Montgomery Canal for some very easy, quick walking to Pool Quay. On the way, finding evidence of this area having been an important centre for lime burning, which was used as a fertiliser by the local farmers.

Having reached Pool Quay, we actually saw the River Severn again and it stayed with us all the way to Crew Green. Interestingly, we were also able to catch a glimpse of Offa’s Dyke, famous for being an early border between England and Wales and built in the late 700 AD. At this point, we were also extremely happy to be able to sit by the river for the first time, the warm sun enticing a myriad of dragonflies and damselflies out, dancing on the water. So good to just sit and stare.

Breidden Hill accompanied us now for the rest of the day as we literally walked all around it. On top we could see Rodney’s Pillar, a monument to Admiral Rodney who died in 1792 and who used the strong oak trees from this area as timber for Royal Navy ships.

Further along , we took time out from the hot sun to lie under a tree and enjoy watching the hawks and swallows circling above. Moving on, we came to Llandrinio bridge after being amazed at the herd of cattle in the river, mooing and generally giving the whole scene a touch of Wild West USA feeling. The bridge is dated to 1775, although there has been a crossing here since Roman times. During World War 2 it was fortified witha pillbox to hide machine gunners and designed to stop any invading German soldiers from crossing the Severn here.

No pubs in Wales but the border is close

On we went, walking further along a dyke in the hot sun until we reached our destination Crew Green. Since we had enjoyed such a wonderful breakfast, we had decided not to stop for lunch but, instead, to look forward to an evening meal in one of the two pubs, identified by my husband in Crew Green just before our bed for the night on the camping site at Brook House Farm. How does the saying go? “The best-laid plans of mice and men often go awry”. And they certainly did go wrong! Both pubs had long closed so our hopes lay with the camping site. Almost immediately, however, these hopes were dashed as Julie, the campsite owner, informed us that there was no food available. My husband was not a happy camper, after walking 19.3 km and the thought of no food in the evening. All ended well though, when after speaking to Julie she kindly agreed to drive us to the nearest pub. The route took us from Brook House Farm, crossing the River Severn into England to the Royal Hill Pub directly by the river. Oh the wonder of cooked food we thought, only to discover that that night only pizza was being served. Still, it tasted amazing. After Julie kindly picked us up again, we finished the evening very pleasantly sitting outside our wooden barel, masquarading as glamping.