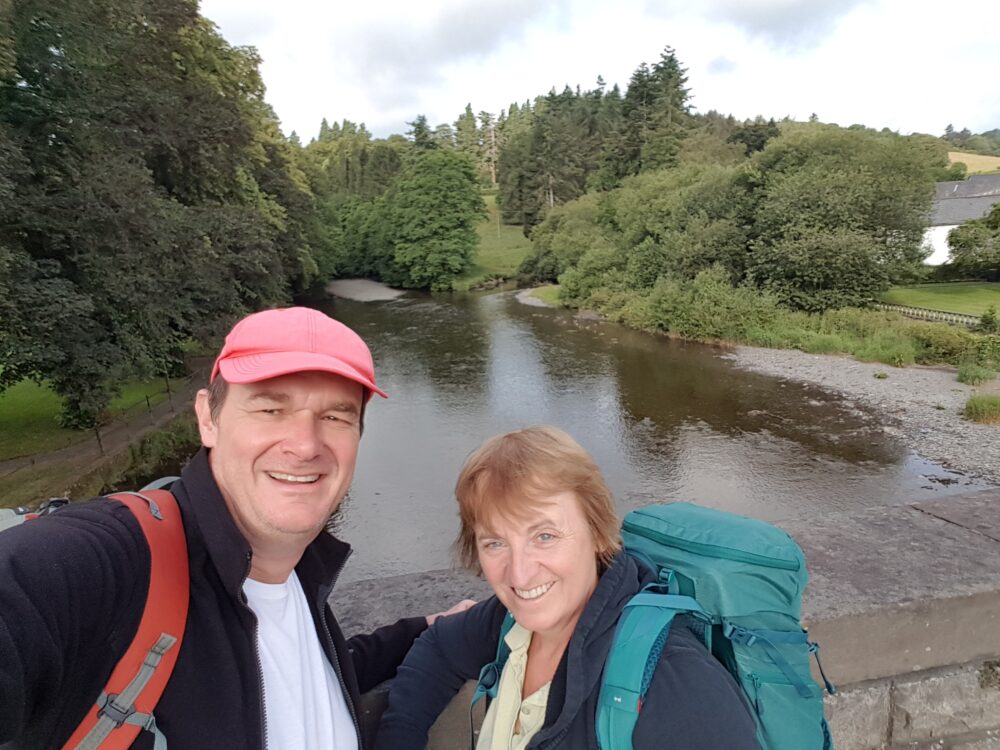 Days 2 and 3 walking the River Severn.

The first thing that struck us was that the Severn Way very seldom followed the river in Wales. So the three days we walked through Wales were varied and gave us a good insight into the country.

Fortified with an excellent cooked breakfast and cheered by the sing-song voice of our lovely landlady, we set off from Llanidloes with a light heart. The sun was shining and we enjoyed climbing through woods , crossing fields of sheep – very many sheep – and taking in the lovely views of rolling hills. The sound of sheep bleating accompanied us all day and admittedly became a little unnerving after hours went by.

After four and a half hours we reached Caerws, known for having had a Roman fort and for its beautiful setting beside the River Severn. It was a welcome change for our picnic lunch before we set off again

After a quick look at the River Severn we said goodbye again for the next four hours and carried on up and down hills. The undulating hills and pasture fields were not always easy to walk with their caked furrows and copious amounts of sheep droppings. Added to that, the Severn Way was sometimes difficult to find and brambles and bushes had to be fought back. We arrived tired but elated in the evening in Newtown after a distance of 29km.

The following day started with fighting for a communal bathroom in our guesthouse. There were just six people to share the bathroom but, as luck would have it, it was always occupied when we wanted to use it.

Saying goodbye to Newtown we realised that today would be the first flat walking day albeit walking a canal and not the River Severn. The Montgomery Canal runs for 56 m from Newtown to Frankton Junction and was built in phases from 1796 to 1821. It was mainly used to transport coal, limestone, raw wool and finished products.

I always find it fascinating walking an old canal towpath. It doesn’t take much imagaination to see the horse in front of you, pulling the canal boat slowly along. Although the canal was closed in 1936, it has now been restored and much of it is navigable again. The sun was shining and we were pulled along by the bright blue dragonflies dancing on yellow flowered water lilies. All along the way we were greeted by various animals drinking the water: a herd of cows lapping joyously or the odd sheep intent on reaching that particular piece of grass so close to the water as well as families of swans with their young signets still wearing their light grey feathers.

We enjoyed a pub lunch in Berriew in the Red Lion, which offered a modern version of the traditional Ploughman’s Lunch : Welsh cheeses, thick cut ham, a paté, pickles, olives and dried tomatoes.

On we went, enjoying the canal until we reached Welshpool, known as the gateway to Wales and our hotel , The Royal Oak – a hotel with a long history, a staircase from the 1700’s but most importantly an excellent bed. After 24.5km, we slept extremely well in it.