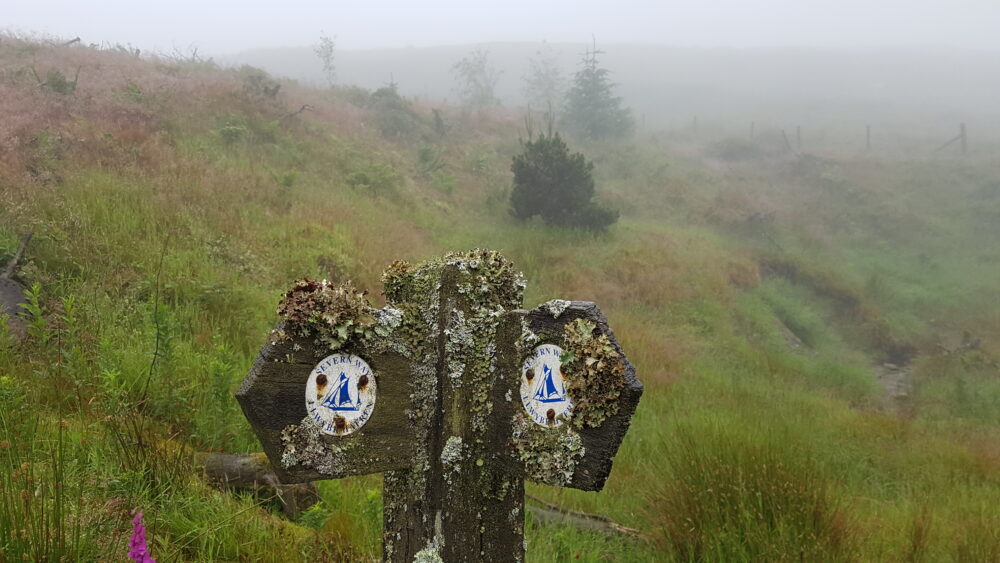 The River Severn – the longest river in the UK – rises 15km to the west of Llanidloes high up on the slopes of Plynlimon, the highest point in the Cambrian mountains.

Having arrived in Llanidloes the evening before curtesy of a National Express Coach, we set off on our first morning by taxi to Eisteddfa Gurig. On a separate note, the Welsh language – originating from the Celtic language spoken by the ancient Britons – is very much present and Wales is a proudly bilingual country with all signs shown in both Welsh and English. It does, however, take me some time to get used to the pronunciation and spelling.

Our spirits were high even though the dark clouds were low and it was raining as the taxi arrived. On with the rain protection and off we set, following the sheep up the first track of the mountain until we were forced to leave the track and cross the mountain . The first hour the boots kept dry but wading through long gorse bushes and stepping into plenty of bogs resulted in soaking wet boots thereafter. For the rest of the day we would be squelching around in our boots – a most unpleasant sensation.

Onwards and upwards with very little visibility until we thought we had lost our way. There are many ways to describe rain but I believe there should be the description Welsh rain – driving rain, persistant rain coming at you at an almost horizontal angle together with a howling wind and that battering sound on your hood for hour after hour. Yes, you need stamina to get through that.

Eventually, after a few scary moments and checking the compass we reached the top of Plynlimon at 752 meters. I had imagined the wonderful views from the top but sadly we could not see anything. Bizarrely, we met two men at the top, amateur radio operators speaking into a radio using the antenna they had lugged up there – all of this in the relentless driving Welsh rain. Strangely, it perked us up to meet these two men before we followed the fence onwards, up and down until we eventually reached the source after four and a half hours of battling the Welsh weather.

Not surprisingly, our mood was somewhat dampened and the planned lunch break became a quick ten minutes , sitting on a wet stone nibbling an energy bar. However, as we made our way down the mountain, the rain let up and we could start to appreciate the beauty of our surroundings, feel the power of the river, building in volume and racing downwards.

Walking through the Hafren Forest was very beautiful, tranquil and pure nature and after six hours of relentless rain, it finally stopped and the sun came out.,

We continued past the picturesque spot called Severn-break-its-neck, a steep cascade, and continued on to the valley road. After three hours of walking through the valley with its lush farmland, dotted sheep on the hillsides and pretty hedgerows, we saw the welcome sign for Llanidloes, and finally crossed the bridge over the River Severn at 7pm.

In total we walked 29km today and after taking care of the drying of our boots, enjoying a shower and a hot meal nothing stood in the way of a well-deserved night’s rest.