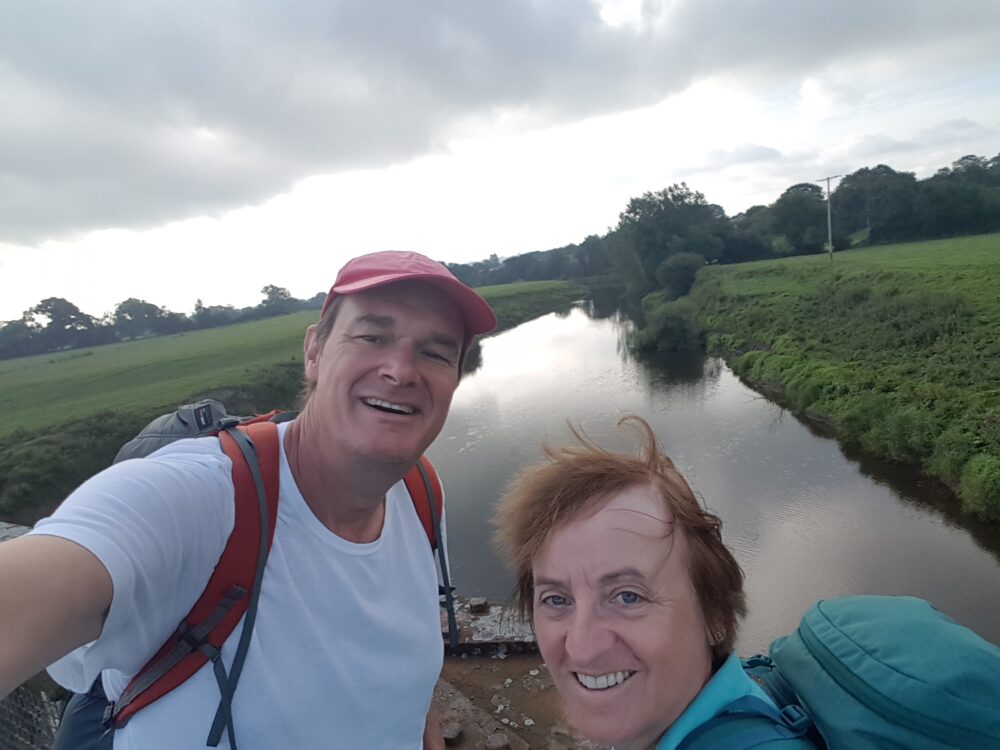 After a strong thunderstorm, we woke at 6am to a clear air and sunshine in our oversized birdhouse; there were in fact two birds hanging upside down from the open doorframe, wishing us good morning. We were very thankful to Julie for providing us scrambled eggs (freshly laid that morning) on toast, served on her patio with a wonderful view across to the river.

We said our goodbyes and crossed the bridge to England, our heads full of anticipation of what Shropshire would be like. I had never visited this county before, only having a vague understanding that we would see a lot of countryside. We didn’t have to walk far, before coming to a wonderful church in Melverley, which is one of very few examples of a timber/wattle/daub church built in 1406 after the previous stone church was destroyed. Apparently, Charles Darwin’s parents are buried in the churchyard, but try as we did, we could not find the grave.

Where is the Severn Way?

After starting the day so well, unfortunately, the next few hours became very trying. We struggled with overgrown paths, covered in nettles and trying and failing to find the path. Not wanting to walk on roads, we opted for a path across fields, unfortunately not counting on the farmer having blocked the paths. The end result being that we walked an extra 7km to get back on the track and we ended up walking 15km on small country lanes, which was exhausting and left us feeling like death warmed up.

Still, our goal was Montford Bridge and the pub next to the River Severn for a late lunch at 2.30pm. Finally, we saw the pub and the sign outside and were more than relieved to read ‘food served until 3pm’ . What a feeling! Entering the cool of the pub and ordering cool drinks at the bar in expectation of ordering food. It was not to be, “Sorry, we are not serving food today” was the answer and we were speechless. Apparently, the cook had done a runner (er ist abgehauen) that morning, reminding us of the previous day when the owner of the pub had also done a runner. It felt like a bad dream as we sat down to our lunch of a packet of crisps and a diet coke. In fact, it was still 10km to Shrewsbury, but enough was enough! We jumped on the bus , deciding to have more time to take a look at Shrewsbury after all our detours earlier in the day.

We then had two hours to explore the town of Shrewsbury, which is almost totally surrounded by the River Severn and, not surprisingly, often suffers from flooding. The town was built here due to the natural moat provided by the river, making it easier to defend and today still has many examples of medieval buildings.

After exploring the town, we went for the ubiquitous (allgegenwärtig) “Meal Deal'”, which can be found in every supermarket and involves a pack of two sandwiches, a piece of fruit ( or packet of crisps ) and a cold drink for 3 pounds. Sitting beside the river, enjoying the sunshine and watching the cricketers across the river, the troubles of the day were soon forgot. We finished our evening in the beer garden behind our room at the Vaults Pub. All a bit rough around the edges but the shower worked and the bed was comfortable enough.